Adding a second camera to your existing hub is very easy and can be done following the steps below.

Note: It is not necessary to scan the hub again as this has already been added to your account during the initial setup with your first camera.

First charge your new camera. To do this connect the included USB cable to the hub and to the camera. Then press the button on the camera for 5 seconds until you see the LED flash green. While charging the LED will flash blue and when fully charged the LED will be solid green. 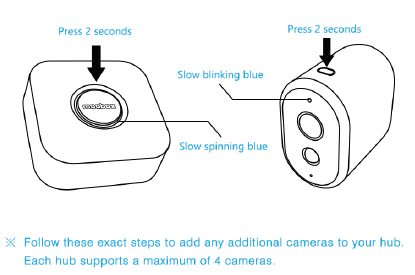 Once the sync is complete the LED on the camera and the light on the hub will both go green and then go out. Open the Mooboxcam app on your mobile device to confirm the camera has been added to your hub. You can now place the camera in its intended location.

If the LED on the camera or the light on the hub turns red then the sync has failed and you should go through the above steps again to sync the camera and hub ensuring that the buttons are pressed in the correct order and only for 2 seconds, pressing the button on the camera for longer may turn the camera off.